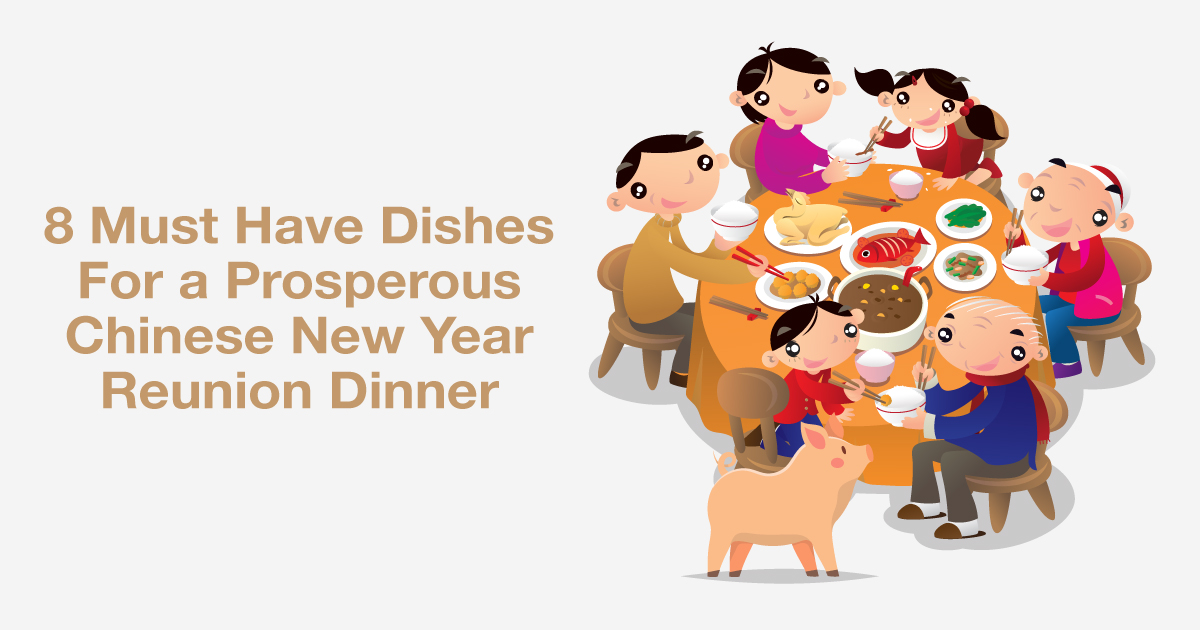 As with many cultures and traditions, the Chinese value things that bring luck. This is especially prevalent during Chinse New Year, where all things that auspicious are a big part of the festivities. Unsurprisingly, there are many dishes that are served during the annual reunion dinner symbolizes good luck and prosperity. These dishes are a must-have for every Chinese New Year reunion dinner, as not only are they delicious and rich in tradition – it is believed that eating them they will usher in the New Year with luck and prosperity as well. As with Chinese tradition, the number 8 symbolizes prosperity, so here are 8 all-important dishes you need to have in your reunion dinner this year!

It has come full circle. 2019 is the year of the pig the twelfth of the 12-year cycle of animals which appear in the Chinese zodiac related to the Chinese calendar. Pork is a traditional Chinese New Years food because pigs symbolize prosperity, overall good fortune, wealth, honesty, and general prosperity. This is due to the pig’s habit of planting itself firmly to the ground before resolutely pushing and moving its way forward.

It doesn’t hurt that pork fat is ranked number 8 on the top 100 list of most nutritious foods as it is a rich source of B vitamins and minerals. In addition, pork fat is actually more unsaturated and healthier than lamb or beef fat.

We are partial to Kim Heng Roasted Meat which serves succulent crispy roast pork to die for. 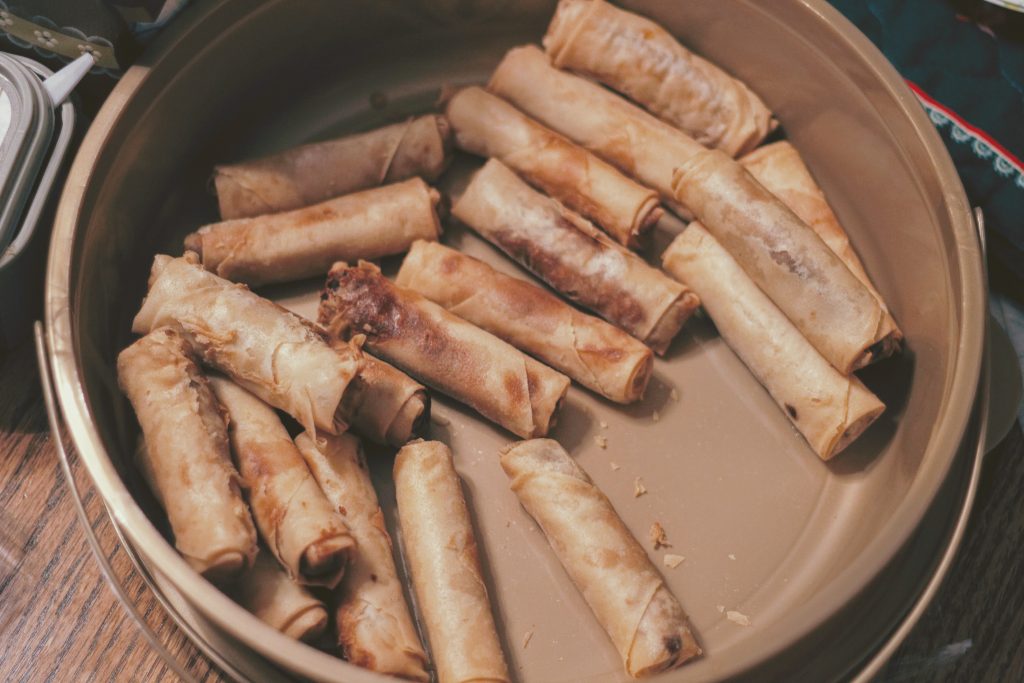 All that glitters is gold. Fried spring rolls are eaten during Chinese New Year as their golden color and shape resemble gold bars and by extension, wealth.

Spring rolls or 春卷 Chūnjuǎn, got their name as they are traditionally eaten during the Spring Festival/Chinese New Year As Chinse New Year is a celebration of spring, eating (春卷) which literally translates to Spring Rolls is apt. As a dish, spring rolls are delicious as the savory rolls are filled with turnip and other vegetables that give them a great crunchy texture and taste.

In Chinese, Black Moss or 发菜 Fa Cai is eaten at Chinese New Year reunion dinners as it sounds a lot like the words striking it rich (发财). Black moss is often used as an ingredient used in making Chinese stews. This ingredient is also braised together with dried oysters and mushrooms giving the dish a delicious blend of textures that are heaven for the palate. Lettuce is added to this dish as in Cantonese (Sang Choy) lettuce sounds like ‘rising fortune’ adding to the overall prosperity of this dish. A great recipe for this from The Woks of Life can be found here.

Children listen up. Make this dish and serve this to your elders as it symbolises long life for them. The length of the noodles is symbolic, so make sure not to cut them, as the Chinese believe that the longer the noodles, the longer the life. The noodles are also simple to make. Here is quick and easy recipe you can follow. 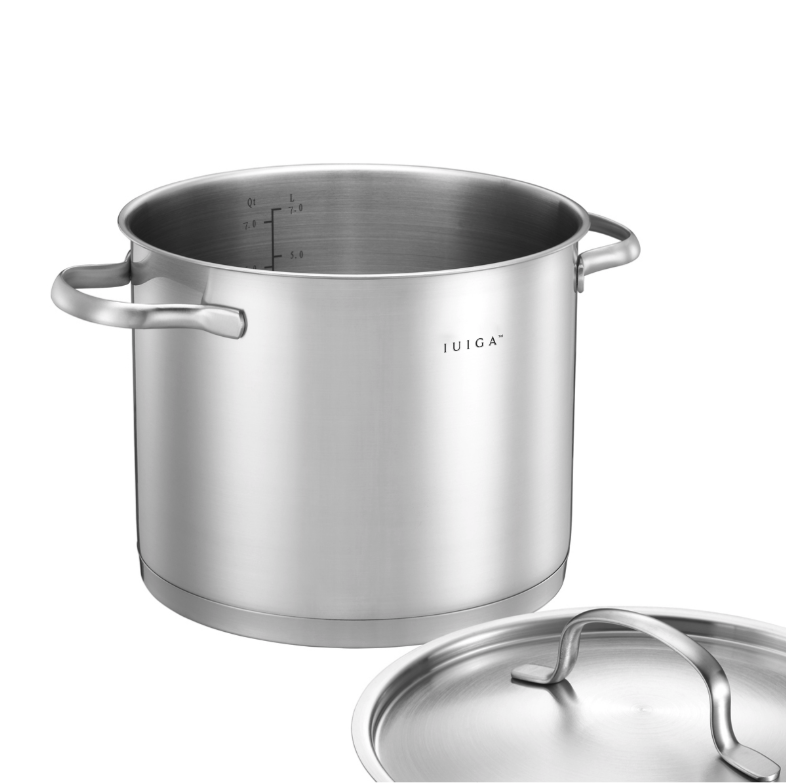 Last but not least we have fish the dish that should be eaten last. In Chinese, the word fish (鱼) sounds a lot like surplus (余). In Chinese culture, it is favorable to have a surplus as it shows you are prospering and can use this surplus to make more wealth the following year. How the fish is eaten matters a lot too. You should eat other dishes first and leave the fish to last with some left over. This is auspicious as eating the fish in this manner represents the hope that the Chinese New Year will start and end with a surplus.

Here are some other points you should take note of.

Now for some dessert. Ever wondered why specific fruit like tangerines, oranges and pomelos are eaten during Chinese New Year. Well the answer lies in their shape, symbolism and the sound their name makes. These fruits are eaten during the festivities as they are largely round and ‘golden’ in colour. Their shape and color symbolises fullness and wealth but more importantly, it is the sound of their ‘lucky’ names.

These fruits are said to bring good luck and prosperity due to their pronunciation and the way they are written. The Chinese word for Orange (橙) sounds similar to success (成). For Tangerines, the Chinese word for tangerine (桔) has the character (吉) written in it.

Eating pomelos is said to bring about recurring prosperity. The Chinese word for pomelo (柚) sounds a lot like the word for again (又). So the more pomelo you eat, the more wealth will keep coming in.

Traditionally, tang yuan is eaten during the winter and summer solstices, the lantern festival or the 15th day of the lunar calendar. However, there are quite a number of people who have it after the reunion dinner as a sweet dessert. Tang yuan is a round, soft and chewy dessert made from glutinous rice flour mixed with water and filled with fillings like sweet syrup, peanut, or fermented glutinous rice. Tang yuan is usually served with a sweet ginger broth.  The Chinese believe that eating these balls will fill you up with good fortune and wholeness due to its round shape, so be sure to add this to your reunion dinner menu! 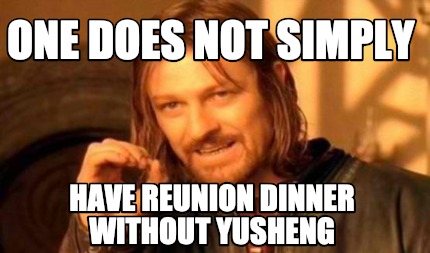 Did you think we were going to miss this. Arguably, the tossing and eating of yu sheng is a quintessential tradition to bring about good luck and prosperity. Yu sheng was said to have been brought over by the Cantonese and Teochew migrants to Singapore in the late 19th century. However, the contemporary version we know today was actually created by four chefs who worked for the Dragon Phoenix Restaurant in Singapore back in 1964.

When interviewed, the four chefs stated that the ‘Lo Hei’ (tossing up good fortune in Cantonese) practice was developed spontaneously by customers. Thus, it is very likely that this ritual of throwing up the yu sheng and reciting lucky phrases before consuming it originated from Singapore. In addition, many believe that the higher you toss the yu sheng, the greater your luck and prospects for the year ahead. Plus, it’s a whole lot of fun too.

Now that you are all ready to pig out during the Chinese New Year reunion dinner, we hope that 2019 will be a prosperous and fruitful year for you. Speaking of prosperity, it’s your lucky day as we have some deals for you! Usher in the year of the pig with these deals from us to you. Don’t just hog them all to yourself, remember to share these deals with your friends as well. 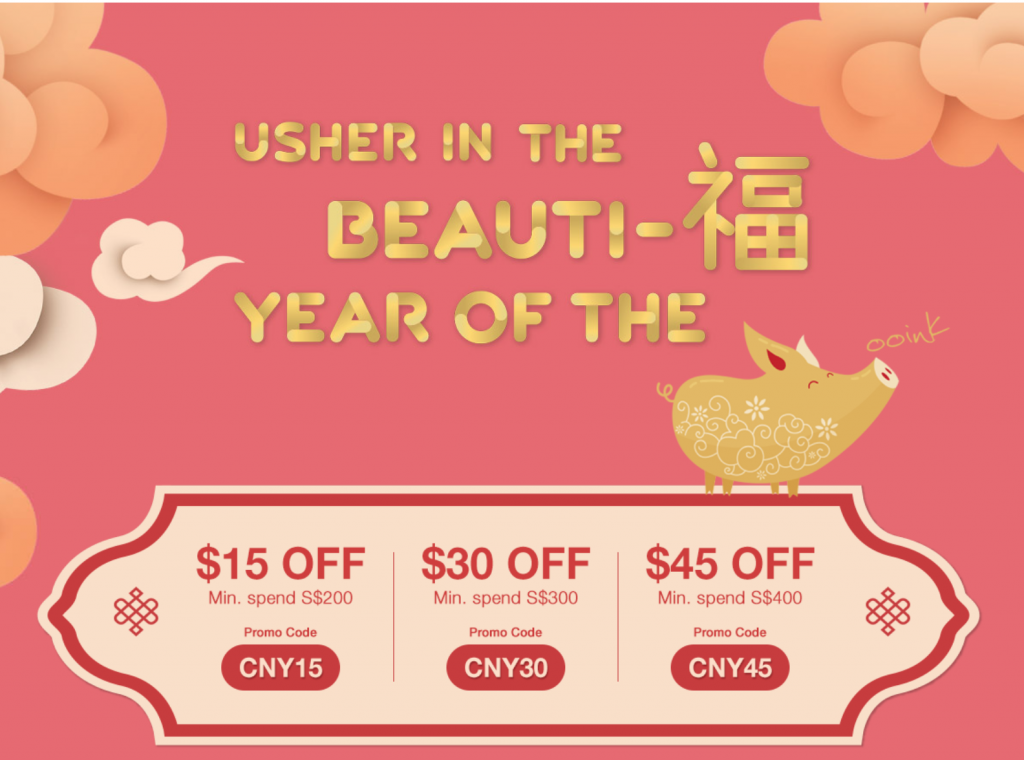