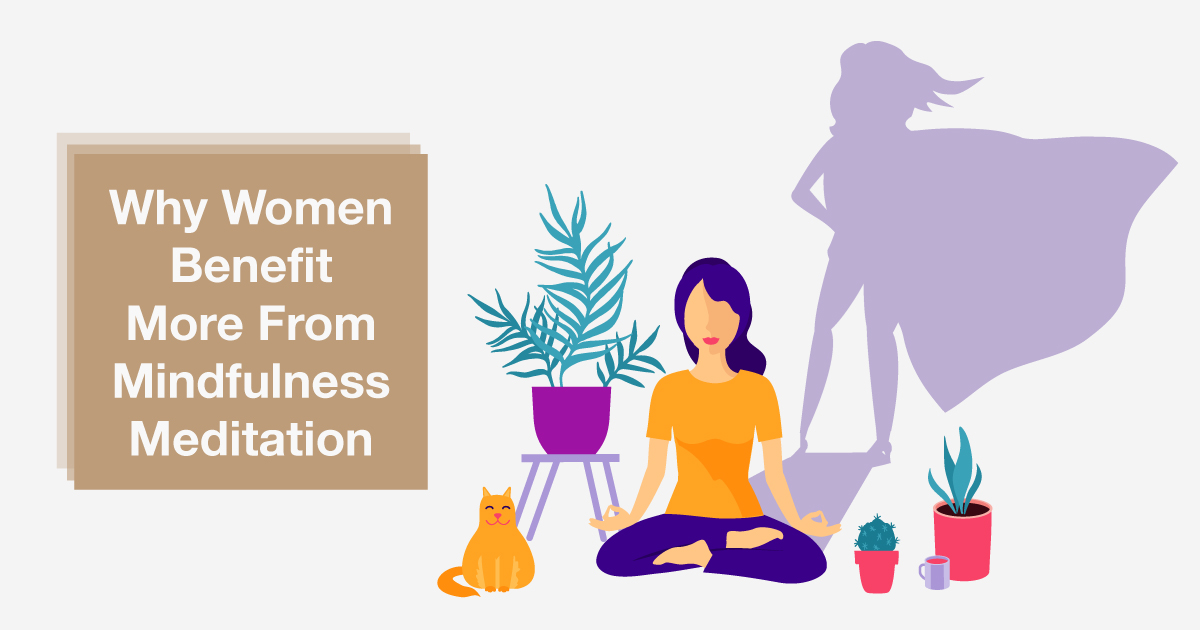 While there has been a great deal of research that acknowledges the positive effect of practicing mindfulness meditation on your well being, physical health, and mental health, little or no research has been done to account for the differences between genders. This in spite of the genders having many clinically significant differences.

Grab your yoga mats ladies. A 2017 study published in Frontiers Psychology by researchers from Brown and Yale universities established that women will stand to benefit more from mindfulness meditation in comparison to men. The study attributed this to the differences in how women and men dealt with emotional distress. Here are the reasons why women would stand to benefit more!

The 2017 study entitled “Women Benefit More Than Men in Response to College-based Meditation Training” was conducted over 12 weeks at Brown University. 36 female and 41 male students were asked to fill up research questionnaires before and after they took part in mindfulness sessions for three times a week.

At the end of 12 weeks, researchers analyzed the questionnaires and observed that the female students benefitted more than the men. The female students saw higher levels of nonreactivity, were less judgemental to themselves and displayed an elevated level of self-compassion.

The study’s authors attributed it to how men and women deal with emotional distress. In general, men have the tendency to externalize their distress by finding an outlet for it. This includes activities like gaming, exercising or mindlessly watching Tv. On the other hand, women have been taught to internalize their emotional distress by doing things like sitting at home mulling about a negative event or writing it down in their diary.

Furthermore, Rahil Rojiani the co-lead author of the study added that:

‘For women, decreases in negative affect were significantly correlated with improvements in mindfulness skills involving their tendency to notice thoughts and emotions without identifying with or judging them, and self-compassion skills involving increased self-kindness and reduced tendencies toward self-judgment and over-identification with emotions.’

As Rahil has pointed out, women tend to spend time having deep and considered thoughts about life. This can be good in some circumstances but when things go wrong, it can become rather unhealthy.

This is also the reason why mindfulness meditation tends to help women better, as it will allow them to not be fixated or overact to negative emotions. Mindfulness will help you become kinder to yourself and deal with these issues in a more healthy manner.

Research has also shown that women tend to multitask more than men and according to this study, they are better at it as well. The study found that women were on average 8% faster than men at completing two or more tasks at the same time. Even though women are better at multitasking, this is something, this something that they should not embrace.

Studies have shown that multitasking has a negative impact on performance. We become less efficient, less effective while we tend to make more mistakes when we multitask. Multitasking also stifles our productivity, creativity, and memory as it increases our cognitive load.

Being able to focus and pay attention is also vital to our mental well being, Multitasking can make us fell distracted and overwhelmed while studies have shown that it increases the levels of cortisol (stress hormone) in our bodies. This can compound as the increased level of cortisol in our bodies will handicap our cognitive function and increase stress levels. In some cases, Multitasking is used by some researchers to trigger a stress response in subjects

There’s still hope yet. By being more mindful and regulating your attention with an attitude of curiosity, openness, and acceptance – women can reduce their stress and improve their performance.

The short answer, no.

Although men did not see as many improvements to the women in their experience of negative emotions and poor self-concept, they did benefit in other ways. The men in the study reported an increased ability to deal with their emotions better as it equipped them with the skills to identify, describe and process them.

In addition, the results of the study do not rule out the benefits of practicing mindful meditation for men.

At the end of the day, this is a good reminder that even though mindfulness is beneficial for everyone, finding the right fit and mindfulness practices is just as important as well.

For more on mindfulness and how to get started on your mindfulness journey; check out our complete beginner’s guide to Mindfulness or join our IUIGA Community to meet like-minded people who are passionate about mindfulness!